Posted on 22nd September 2018 at 14:43
September is good time to lay turf by the way, if your lawn suffered over the summer, as most did. The ground is still warm and there be rain...
But earlier in the year after the seemingly unrelenting wet of the winter, I hardly walked across any prospective clients lawn without the accompanying squelch - and then the Beast from the East waded in for good measure. Lawns were looking less popular.
And suddenly summer arrived - and showed no intention of leaving! Not for me to complain but months of dry, hot sunshine brings its challenges in the garden - and not just how strong to make the next batch of Pimms...
Lawns blanched in the heat and I put off returfing my excuse for a vegetable patch until the weather broke. See below...
I'm often asked about fake turf - at which point I blanch in horror!
FAKE? Fake grass!?
Now I'm not a huge fan of the perfect lawn but I've yet to acquiese to a fake one. There'll be borders of plastic perennials next!
But wait... 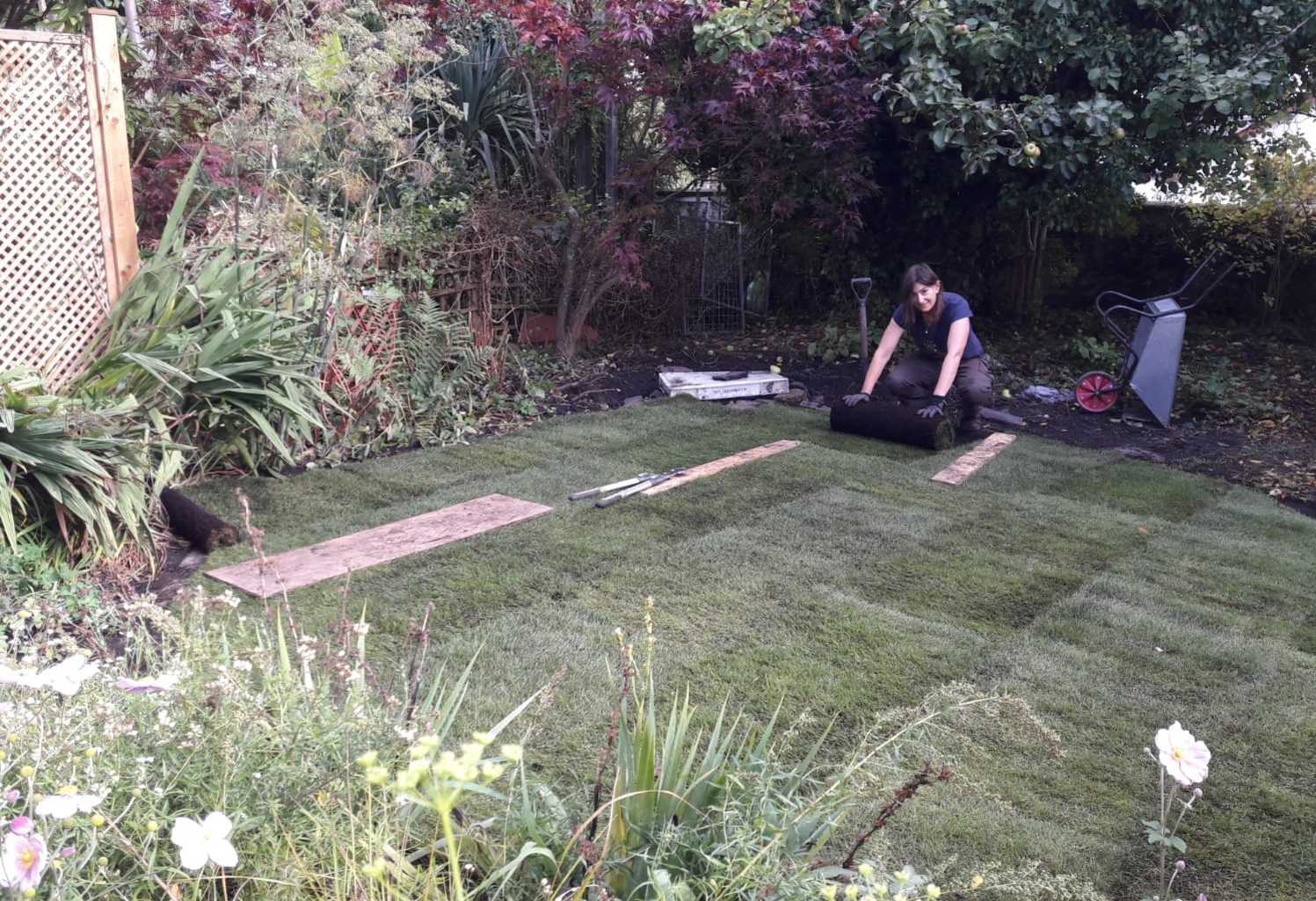 - if your garden was a bog over winter, if your football mad kids turned it into a mud wrestling pitch, if it browned to a crisp over summer and you fretted about hose pipe bans or - last but not least - you hate mowing it - then fake turf may be the way.
To be fair, fake grass has come long way- far superior to Astro turf of the sports pitch of yesteryear. From nursery school play surfaces to something resembling a putting green there are any number of different swards - you have to be up close and personal to tell it wasn't real.
One landscaper I work with told me a story of a client who had a mud bath outside his back door - the dog dragged in its muddy paws, his young boys got covered after kicking a ball about and he hadn't been in his own garden for years! But after the fake lawn was laid he spent a happy summer playing badminton with his daughter. As he said -that's got to be worth it , hasn't it?
What am I saying?!
In principle I loathe it. In spite of all its advantages it has one massive flaw - it just ain't real. Eventually it will end up in landfill, refusing to rot - it is anti- nature, anti-life and terrible for the wildlife we should be encouraging in our gardens.
Several landscapers I know and work with are forever proudly posting photos on their Facebook pages of the latest fake lawn for a happy customer - usually getting a disdainful comment from me!
Why do it, I cry ? Well, all of the above. But before you do consider this - a lawn is a living, breathing thing that supports countless living organisms. It will miraculously recover after a drought, it doesn't have to be perfect, nor mown to within an inch (or less) of its life. Let some of it grow - a field of dreams to all manner of wildlfe. It's an outdoor classroom to a child- probably the first natural environment they encounter.
A proper lawn - one of the few things Britain still does best.
(Below - job done. Now just have to sort out the borders. #cobblerschildrenhavenoshoes, # buildershouse, #thedog destroyedmygarden.) 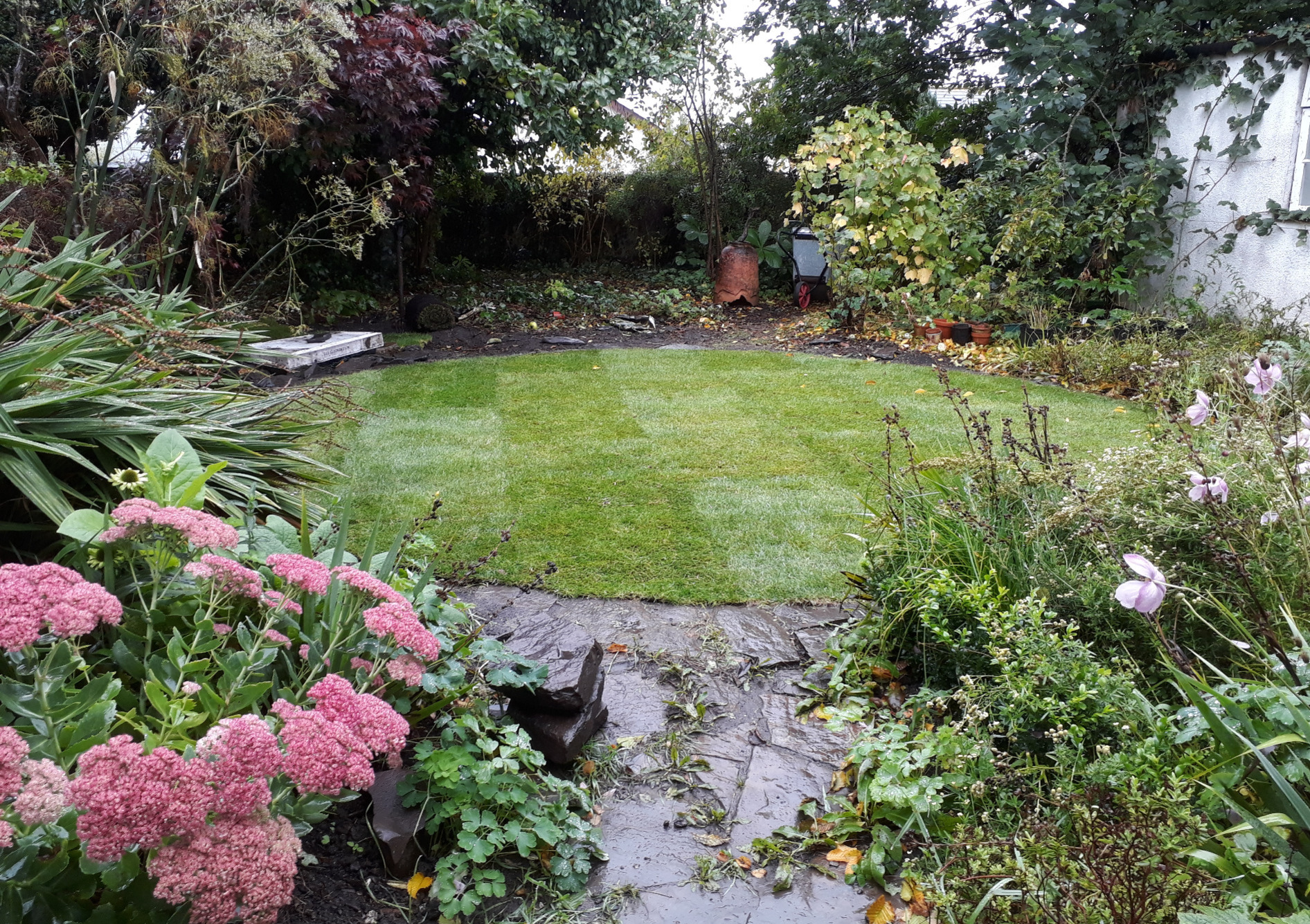